The computer we work with on a daily basis contains an infinite amount of information. It seems seemingly logical that we can communicate with only a few dozen keys. We can even, at the push of a button, convert characters to another language. This is only possible through strict agreements with designers, hardware and software developers. The Unicode Standard 12.1, published in May 2019, encodes 137,929 typographic characters from exactly 150 writing systems that can be used on every computer (and smartphone). This includes the emoji that are used worldwide. New characters are added every year. On our computers, Latin letters, Chinese ideograms and even extinct cuneiform characters can be used. But which scripts are still missing?

Designer researcher Johannes Bergerhausen, born 1965 in Bonn, Germany, and artist Ilka Helmig, born 1971 in Frankfurt, Germany, focus on the unknown and obscure writing systems. This exhibition shows 71 proposals that have been submitted to the Unicode Consortium but have not (yet) been included in the World Standard. Ilka Helmig shows drawings of air turbulences caused by the process of speaking and articulating. Air is pressed through the lingual lips and released into the environment in the form of structured air vortices. Scientists found that the vortices of the spoken sounds are reproducible.

In this way Bergerhausen and Helmig stimulate a discussion about the cultural heritage of writing, the existing overviews of written languages, the digitisation of the languages of the world and the lack of typographical forms for so-called »Non-Latin« or »minority« scripts. What is a script? How many people speak which language? And what are the missing scripts? 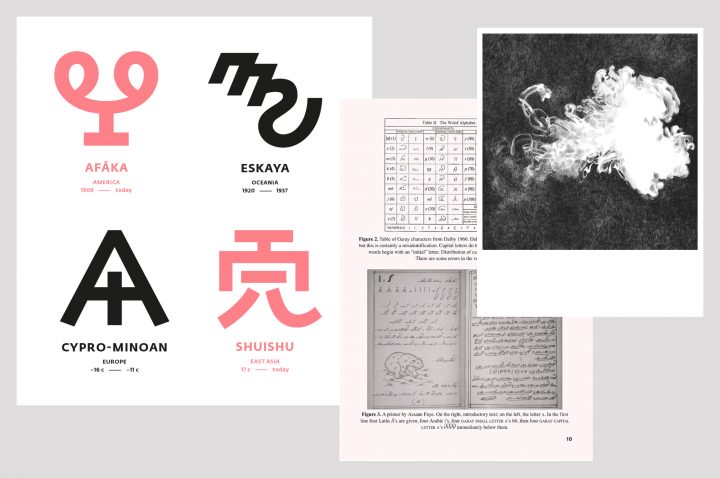